‘Life ain’t easy and it ain’t always fair…but there’s beauty in every day.. you’ve just got to know where to look’ 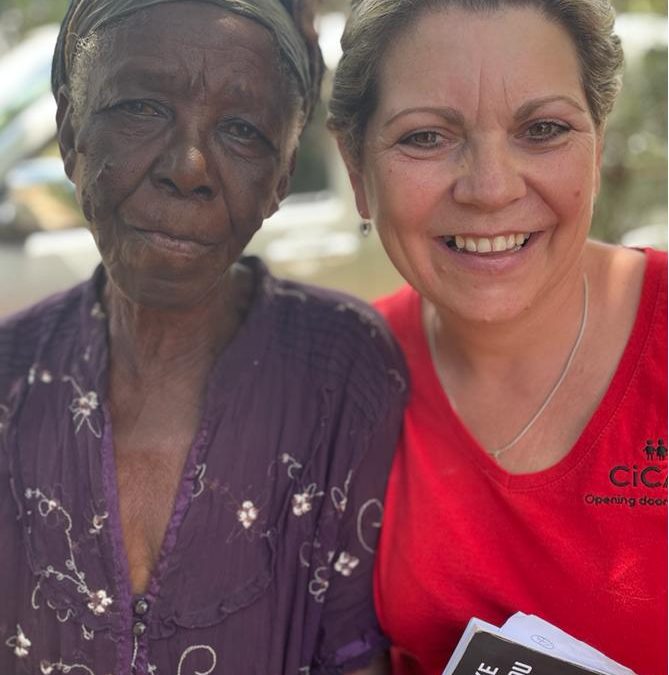 It’s COVID test time again.  Helpfully the British government have no requirement for tests anymore when entering the country but because we are transiting Kenya, we have to have one within 96 hours of our journey.

The process is not as easy as ‘click and collect’ which we did before we left.  This involves an overnight stay in Kitwe, before an early start tomorrow for Ndola.  We are staying with our very good friends, Susanna and Abdul, who also happen to be good friends with the manager of the testing centre, so confidence is growing that everything should work out.

We didn’t arrive here until after dark because we had a full day of visits back in Mufulira.  The day started early with the sound of chopping and felling of trees just outside our window.  We remembered we had hired a young man to start the process of clearing the smaller front garden for its re-birth in memory of Judith, Erica’s sister.  He had come with just a small axe and a shovel and in a few hours had single-handedly felled several medium size trees and one enormous mango tree.  Having done some labouring for a tree surgeon friend some years ago, I was in awe of what he managed to do without a single power tool and without breaking a sweat.

It is true what is said, that if prosperity was always linked to hard work Africa would be by far the richest continent in the world.

Early on some of the CiCA sponsored children visited for their periodic reviews.  One young lad had travelled with his mother over 50km.  Just before he left, we found out he hadn’t had any breakfast that morning, and so we were able to share bread and tea and fruit with them.  What a great opportunity in a small way to demonstrate the reality of family.  CiCA is so much more than an administrative operation.

This was reinforced to us as we later visited the house, we are building to provide safe, secure, independent living accommodation for elderly people.  We spent time looking at, filming and discussing the project, and then moved on just a few hundred yards to where we knew some of the people, we most wanted to help were staying.

We arrived at the home of Anna, a very elderly lady who we have known for quite a while.  Her house is a single room, mud structure probably slightly smaller than a garden shed.  The fragile wooden door was chained and locked.  Her neighbours told us that just yesterday, relatives she didn’t have any contact with came to find her to take her for hospital treatment.  They said she didn’t want to go, and she was very definite that she would be back.  We really hope so.

As we were preparing to leave another lady, a widow, named Paulina came and found us.  We have known Paulina for as long as we have known Anna.  She looked frail and sad.  She was definitely very happy to see us, but when we asked how she was she simply said ‘hunger is going to kill me’.  She was eating a small unripe mango, which it turned out was the only food she had eaten in more than 24 hours.  As we stood and talked to her she began to weep.  Needless to say we left some cash and her friends and neighbours that we know and trust said they were going to make her some porridge and cook her some proper food.

In that one encounter was the whole rationale for the vision of ‘Traveller’s Rest’.  To provide for elderly people who are unable to provide for themselves but who deserve, dignity, safety, and peace in the last years of their lives.

I mentioned earlier that if prosperity really was the reward for hard work, then Africa would be super rich.  It’s also true that if this world really was founded on fairness and justice, people like Paulina would not have to face a life of hunger with only an unripe mango to comfort them.  Deep down we know that neither of those things is true.  However, with application, partnership and investment we can do a little bit to bring relief from everything people naturally get from life, to bring a little bit of unnatural happiness and even joy for precious people like Paulina.